Six students from St. Peter’s University in Jersey City, NJ visited the Zohrab Center yesterday as part of the requirements for a theology course.

The students were accompanied by their teacher, Dr. Susan Graham, Associate Professor of Theology at St. Peter’s. Dr. Graham’s course, entitled Pilgrimage in the City, explores the phenomenon of pilgrimage—travel undertaken to a meaningful destination for religious or sacred purposes—in Christian history, theology and spirituality. The students’ visit to the Zohrab Center and St. Vartan Armenian Cathedral qualified as a pilgrimage destination in its own right, but also afforded the “pilgrims” the opportunity to deepen their appreciation for the unique role of pilgrimage in the history and spirituality of the Armenian Church.

ZIC Director Fr. Daniel Findikyan gave a brief survey of the centrality of Jerusalem and the Holy Land as a cherished destination for Armenian pilgrims since at least the fourth century. He also spoke about the revival of pilgrimage, especially among young people, to sacred shrines within the Republic of Armenia today.

The Zohrab Center has seen a good deal of noted Armenian art historian Dr. Sylvie Merian in recent weeks. In preparation for an academic conference paper, the scholar has been paging through some of the Zohrab Center’s most precious rare books.

She tenderly turns the pages searching for woodcut illustrations printed in Armenian religious books, most of them printed in Constantinople. “There’s another one!” she calls out, pointing to an intricate, full-page illustration featuring biblical images and saints with remarkably detailed facial expressions.

The woodcuts that were produced by Armenian artists in Constantinople are exceptional because many of the compositions for these illustrations were actually closely modeled after western European prints, especially Dutch. The ever-cosmopolitan Armenian artisans became familiar with the designs through the many books printed in Latin, various European languages, and Armenian, which contained them as illustrations. Many such printed books found their way to Armenian communities in Ottoman Turkey and Safavid Iran in the 17th to 18th centuries.

Dr. Merian has discovered dozens of Dutch-inspired Armenian woodcut illustrations in the ZIC’s rare book collection. Often she can even identify the Dutch artist whose work lies in the background of the Armenian print.

But the illustrations inspired more than just woodcut artists. Armenian silversmiths from Kayseri adapted the European designs as imagery for silver plaques used on religious books. Similar images in Armenian manuscript illuminations—which continued to be produced up to the early 19th century in the Near East—and even wall paintings in churches of New Julfa (an Armenian suburb of Isfahan, Iran) are abiding proof of the Armenians’ fascination with the European styles and their openness to adopt and adapt them. In this way, new Christian iconography and decorative motifs were disseminated in various media throughout the region—

Sylvie Merian is Reader Services Librarian at at The Morgan Library and Museum in New York City. She received her PhD in Armenian Studies from Columbia University’s Department of Middle East Languages and Cultures, writing her dissertation on Armenian bookbinding. She has published and lectured internationally on Armenian codicology, bookbinding, and manuscript illumination, as well as on the history of the book.

Dr. Merian will present an illustrated lecture on her woodcut research at the Zohrab Information Center on Wednesday, April 9 at 7:00PM.

The Zohrab Information Center is delighted to present a fascinating new addition to its vast and growing collection: Innocents Return Abroad, Volume II: Exploring Ancient Sites in Eastern Turkey by Jack Tucker. A  succinct work of scholarship, Innocents Return Abroad is a traveler’s guidebook to the many ancient ruins and sites in Eastern Turkey. In a welcome innovation, the author provides exact GPS coordinates for each of the sites described. This geographic information allows pilgrims, tourists and scholars to find these largely forgotten and unmarked sites. That, in turn, will foster study and conservation of these precious monuments, the author anticipates. END_OF_DOCUMENT_TOKEN_TO_BE_REPLACED

Nearly thirty participants of the St. Nersess Deacons’ Training Program filled the Zohrab Center last Sunday after having participated in the Divine Liturgy in St. Vartan Cathedral. The teenagers and their staff learned about the Center’s history and work. They also perused the Center’s library and rare book holdings, many attracted especially by the extensive collection of early liturgical books and Bibles, including a fine copy of the first edition Bible in Armenia printed in Amsterdam in 1666.

One of the many innocuous, white boxes in a back room of the Zohrab Center holds dozens of personal letters from the 1950’s and 1960’s, correspondence between the late Archbishop Tiran Nersoyan and Srpouhie-Anna Essefian. The letters were recently uncovered by Dr. Roberta Ervine, Professor of Armenian Studies at St. Nersess Armenian Seminary, who published a volume containing texts and English translations of Nersoyan’s letters that the former Jerusalem Patriarch-elect and Primate of the Eastern Diocese bequeathed to the Seminary upon his death in 1991.

Ms. Essefian, who worked for twenty-two years in the United States Information Agency in Washington, DC, was active not only in St. Mary Armenian Church there, but also in the New York area. She served for a number of years in the Armenian Educational League in Brooklyn and was active in the mid-twentieth century Armenian life of New York City. In later years she took a degree in history at Georgetown University, writing a dissertation, entitled, Medieval Monarchies of Armenia. Her archives, containing several dozen letters, photographs, personal memorabilia, newspaper clippings, research notes and a diary, are housed in the Zohrab Center. The documents include a personal letter from His Holiness Vazken I, the late Catholicos of All Armenians; and a personal telegram from President Dwight D. Eisenhower.

The correspondence between Ms. Essefian and Nersoyan, whom she had first met in the 30’s, span a period when the Archbishop was residing in Jerusalem and later in New York City. The congenial letters concern the affairs of the Armenian community in Washington DC and specific issues connected with Ms. Essefian’s ongoing armenological studies and research. Most interesting are allusions in the Archbishop’s letters to the situation of the Armenian Patriarchate in Jerusalem, which gravely concerned him.

Dr. Ervine is continuing her study of these and other letters of the late Archbishop, which she plans to publish in a second volume of his writings.

Dozens of other archival collections in the Zohrab Center await exploration and scholarly study.

Four young people interning at the Armenian Mission to the United Nations visited the Diocesan Center and met with Archbishop Khajag Barsamian, Primate of the Diocese of the Armenian Church of America (Eastern), on Thursday, July 29.

The group received a tour of the Diocesan Center and St. Vartan Armenian Cathedral. They had an opportunity to learn more about Diocesan departments. In addition, they were introduced to the Diocese’s large book and artifact collection in the Krikor and Clara Zohrab Information Center, including the first Bible printed in Armenian and ancient prayer scrolls.

They continued on to St. Vartan Cathedral where they learned about the history of the edifice, as well as its beautiful artwork and architecture.

At the conclusion of the tour, the interns were received by Archbishop Barsamian in the tahlij (formal reception room) of the Diocese. Archbishop Barsamian spoke to them about the history of the Eastern Diocese and the determination of its founders to preserve the Armenian faith and culture in America. He encouraged the interns to embrace their Armenian identity and to share their heritage with others.

“I am happy to see young Armenians from around the world serving our community,” said Archbishop Barsamian, adding that he wished them a productive experience at the Armenian Mission.

Ambassador Nazarian said that the interns would utilize themes raised at their discussion with the Primate in their meetings and workshops at the UN.

During the three-week program, interns are introduced to the work of the Armenian Mission and have an opportunity to learn about foreign policy issues affecting Armenia today.

The Rutgers University Armenian Club recently took time out of their busy school schedules to spend an evening in the Zohrab Center, learning more about the center’s resources as well as about their culture and heritage.

On Friday, April 22, 10 enthusiastic and inquisitive Rutgers Armenian Club members were introduced to the center’s library collection – which consists of over 20,000 books ranging from Armenian history to literature – as well as numerous journals, periodicals and newspapers from around the world. They learned about the history of the Zohrab Center and its significance not only to the local Armenian community but to the Armenian diaspora as a whole. In particular, the students enjoyed the “treasures” of the Zohrab Center, which includes the first Armenian Bible printed in Amsterdam in 1666, ancient Armenian coins, and “himayils” (Armenian scrolls). 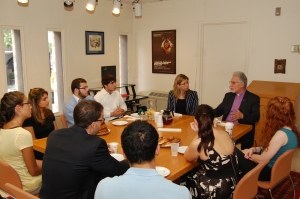 Archbishop Vicken Aykazian, Legate of the Diocese of the Armenian Church of America (Eastern) spoke to the summer interns at the Armenian Diocese on Thursday July 15. In an informal setting over tea and breakfast, the amiable Archbishop Aykazian covered many topics during the discussion, including the qualities of a good leader, the current political and economic situation in Armenia, the acceptance of the Armenian Genocide, as well as his work with Habitat for Humanity and many ecumenical movements including the National Council of Churches, of which he was the former President.

The interns were very interested in what Archbishop Aykazian had to say and asked probing questions about his efforts in having the genocide in Sudan recognized, the situation of the Armenian Patriarchate in Istanbul, and his thoughts on Armenian assimilation throughout the world.

“In our discussion today, not only did we get a glimpse of Vicken Srpazan’s wisdom, but also his sense of humor and ability to engage everyone he is in contact with,” said Zohrab Center intern Haig Monokian, who will be a freshman at Villanova in the fall. “He is a great example for people all over the world and makes me proud to be an Armenian.”

“It was truly inspiring to listen to Vicken Srpazan speak to us today at the Zohrab Center,” said Zohrab Center intern Nicole Saglamer, a sophomore at NYU. “His charismatic nature and positive attitude were not only insightful, but also an inspiration to the Armenian youth and leaders of the future.”

Added Rachel Goshgarian, director of the Zohrab Center, “We were very happy that His Eminence Archbishop Aykazian accepted our invitation to speak with interns in the Zohrab Center. He spent a lot of time with them and spoke about issues dear to their hearts. His humility and openness to the younger generation is indication of his natural leadership.” 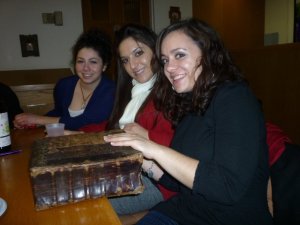