The first is contained within its pages, be it a novel, an atlas, a cookbook or a chemistry textbook. The second is the book’s own story—how that particular volume came to be—from the printing press to the bookstore or dealer—traversing perhaps multiple owners and readers, until it falls into your hands.

Recently the Zohrab Center was the beneficiary of the library of the late and beloved priest Fr. Garen Gdanian, who passed away in 2013. While sorting through cartons of books, I noticed the elegantly embossed leather binding that is the hallmark of a precious old book. 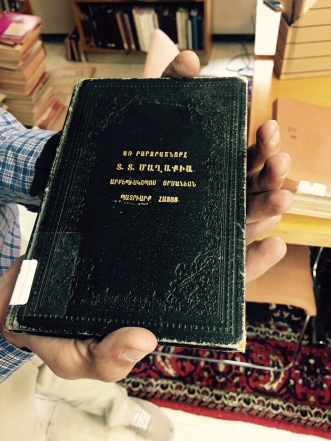 My suspicions were confirmed as I plucked it out of the box and carefully turned the book in my hands. Lustrous gilt edging glittered in my eyes while my fingers coursed over the grooves and ridges of the intricately embossed cover. Whoever bound this book spared no expense.

He, of course, is the great Armenian churchman from the turn of the twentieth century, easily one of the greatest Armenian intellects of modern times, who served as Patriarch of Constantinople from 1896-1908.

Want to read more about the Patriarch Maghakia Ormanian along with an excerpt in English from his famous Gospel commentary, Hamabadoom? Click here for the latest issue of the Armenian Church magazine The Treasury / Գանձարան.

Yet while Ormanian was a gifted and prolific author, the cover indicates that this book was not written by him, but addressed to him.

My first thought was that the book contained a letter directed to the Patriarch, who was a controversial figure. He resigned his position as Patriarch under pressure from political extremists, who had attacked him for his stubborn refusal to support any form of violence in the Armenians’ opposition to Abdul Hamid’s regime. Could this book be some anti-Ormanian diatribe?

But no. A gilt inscription on the book’s thin spine reads Կրօնի Ուսում [Course in Religion].

Indeed, turning to the title page, we read the full title of the work:

Illustrated Course in Religion from the Known to the Unknown, from the Impenetrable to the Believable. A Face-to-Face Course and Graded Study. Intermediate Level.

The author is a certain Tavit Khachgonts (1866-1918). It was published by the Balentz Press and Bookstore in Constantinople (Istanbul) in 1905.

The author adds this codicil to the title page:

Objective
To transmit Armenian Christianity to Armenian young people and to present their mother church as something for them to love.

So much for the first story.

The gilt inscription on the leather cover addressing the book to Patriarch Ormanian turns out to be a glorified gift tag. This copy was a personal gift. It was specially bound for the Armenian Patriarch, whose monogram, M.O., is stamped on the title page. This book once belonged to the great Maghakia Ormanian.

How did the book travel from the sacred galleries of the Armenian Patriarchate in Constantinople over 100 years ago to Fr. Garen’s personal library in Troy, New York?

The mystery continues. Read on…

A handwritten inscription on the inside cover is the first clue. Scrawled in messy, misspelled Armenian is the following caption:

Paging to the third leaf, we read this inscription in the same handwriting:

1961. I too decided to give [this book] to the priest of the 35th [street] church.
[Signed in Latin letters] Levon Agababian.

Piecing together all the evidence, we can reconstruct the outlines of our book’s biography.

Published in 1905, the book was gifted—presumably by its author, Tavit Khachgonts—to Patriarch Maghakia Ormanian. The author’s esteem toward the Archbishop is reflected in the lavish and doubtless costly binding that Mr. Khachgonts commissioned for the honorable recipient of his gift.

Presumably the author presented his gift upon its publication in 1905, and certainly before Ormanian stepped down from his Patriarchal throne in 1908.

How did our book get from Ormanian’s personal library to Mr. Agababian’s desk in New York in 1926? We cannot know for sure. Maybe the book was a gift of the Patriarch to Mr. Agababian. Perhaps they were dear friends. Maybe there were other intervening owners. Maybe, as so often happens, the book was tossed into a corner and forgotten for a time until  by happenstance someone retrieved it, recognizing its noble lineage.

What is clear is that Mr. Agababian received the book as a gift. We can read through the spelling errors, inelegant handwriting and rather colloquial Armenian of his inscriptions that Agababian was likely an immigrant from Constantinople/Istanbul. His primary language was not Armenian, but probably Turkish. His second inscription implies (more clearly in Armenian than in my English translation) that just as the book was gifted to him, so now he is passing the book on. He gives it to the young pastor of St. Gregory in Manhattan, Fr. Garen.

Fr. Garen, no doubt fully cognizant of the book’s back story, holds onto it for decades, keeping it close by as he served several Armenian Church parishes in the Northeast until his death in 2013. His wife, Yeretzgin Zabel, kindly donates his library, with Ormanian’s book, to the Zohrab Center, where it resides today.

But the story continues. Open to the inside back cover, turn the book upside down (!), and we read another inscription by Mr. Agababian. In highly Anglicized Armenian he writes (under the later scribbles of a child or grandchild?): 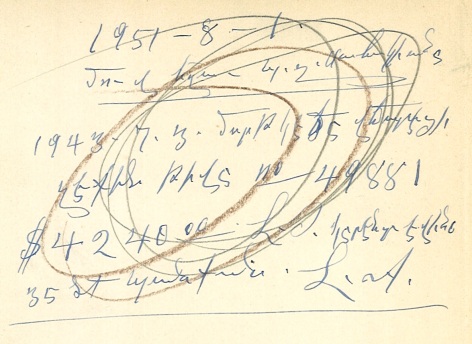 Much as people record important family events such as the birth of children and grandchildren in the family Bible, Mr. Agababian made a note of what must have been a monumental milestone in this Armenian-American immigrant’s life. He paid off the mortgage of yet another character in the story, a certain Ghevont Sahagian. Who Mr. Sahagian we also cannot say. But he noted this business transaction in a book that was precious to him.

For Mr. Agababian, this book represented much more than a reference work gathering dust on a shelf, pulled down once in a decade to clarify some pointless point. It was rather  a sacred bearer of history, a witness and memorial to chapters in his own story; and his personal, precious, tangible link to a larger, ancient and sacred Armenian Church community of which he was an integral part, and for which he had obvious deep affection.

Today Levon Agababian, about whom we know nothing else, is himself memorialized in a book whose true value is not to be judged by its cover.

Anyone wishing to read and examine the historic book by Khachgonts is welcome to visit the Zohrab Center. For further reading on the history of the Armenian Church in America see The Torch Was Passed: The Centennial History of the Armenian Church of America, edited by Christopher Hagop Zakian (New York: St. Vartan Press, 1998). If you knew Levon Agababian, or if you are related to him and can fill in additional details from his story, please contact us at zohrabcenter@armeniandiocese.org.

2 thoughts on “Noble Lineage: The Mysterious Story of a Book”