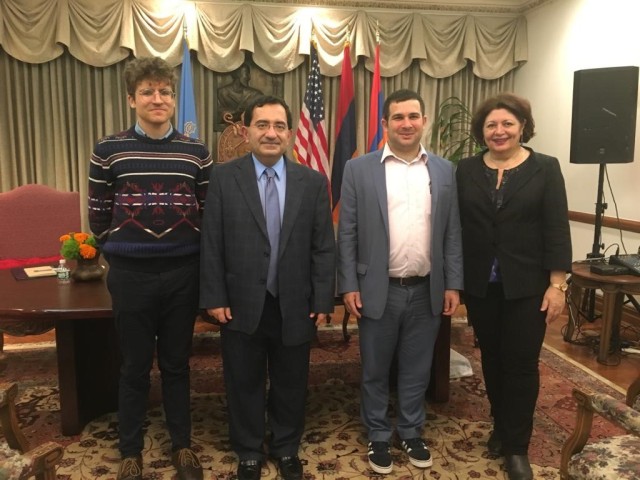 NEW YORK, NY—A Nor’easter with pounding rain and howling winds did not prevent more than 60 brave souls in attending a fascinating forum on “Western Armenian in the 21st Century: A Dialogue About Challenges and New Approaches.” The panel discussion was held in the Eastern Prelacy of the Armenian Church in New York on October 16. The departing point of the discussion was the recent publication by the SAS of the collective volume Western Armenian in the 21st Century: Challenges and New Approaches, edited by Bedross Der Matossian and Barlow Der Mugrdechian.

It was presented by the Armenian National Education Committee (ANEC), the Krikor and Clara Zohrab Information Center, and the Society for Armenian Studies (SAS), with Archbishop Anoushavan Tanielian, Prelate of the Eastern Prelacy of the Armenian Apostolic Church, in attendance.

Mary Gulumian, director of ANEC, welcomed everyone and introduced the topic and panelists. Dr. Christopher Sheklian, director of the Zohrab Information Center, served as moderator of the discussion. He began by bringing greetings from Bishop Daniel Findikyan, Primate of the Eastern Diocese of the Armenian Church of America, who he said “is deeply committed to a problem we all have to tackle,” and hopes that different organizations will continue to work together to address the vitality of Western Armenian.

Dr. Sheklian set things in motion by asking how Western Armenian can be incorporated, and used in daily life, in every venue, and for all kinds of things.

* Not Impossible to Learn Armenian

Dr. Matiossian, born in Uruguay, has written, taught and been published in English, Armenian and Spanish for 40 years. He stated that anyone can learn Armenian, and use it daily.

“Our defeatism should be taken away. It’s important to be proactive,” the scholar said. “One should not wait to be taught by someone. It’s necessary to want to learn the language and make it relevant to daily life.” He also stressed the importance of producing material for this purpose.

Gilda Kupelian emphasized the importance of supporting Armenian schools, their structure and curriculum. “We have to use strategy. The work has to be planned, and not done by accident.” She emphasized that Armenian schools need financial allocations for resources and teacher training. One possibility for a new resource Kupelian suggested was the creation of “Armenian centers” where the language could be used in an enjoyable, natural environment.

Jesse Arlen stressed three necessary components: firstly, “CHOICE – Armenian being presented as a beautiful thing, not for money, but for meaning and value. Secondly, [Armenian] as a VIRTUAL ENTITY, since today’s technology offers a large number of items on line. And thirdly, [Armenian] as a PROACTIVE part of our daily lives.”

Sheklian pointed out that because of today’s growing technology, daily newspapers are no longer the dominant force they used to be. Therefore, he asked the panelists to offer specific tools and material that can be used today to foster learning Western Armenian.

Matiossian explained that “our institutions need to develop any kind of publications for those over the age of eight. Things should be contemporary,” he said, adding as example the recent seven-volume Western Armenian translation of the “Chronicles of Narnia.” He recalled that when the Eastern Armenian translation of “Harry Potter” came out in Armenia, the kids there went crazy with excitement.”

Jesse Arlen continued with this theme saying that “Harry Potter” type of books that resonate with youth are important. He added that whatever material that is developed should also try to employ current technology that is especially popular with younger people. He gave the concrete example of an Instagram account “Lsetsink,” (“We heard”), which presents funny snippets “overheard” by the managers of the account—but in Western Armenian.

* Value Needs to Be Intrinsic

Kupelian reaffirmed the need to cultivate the intrinsic value of Armenian, saying that the best students in the school she directs are “those odars married to Armenians. They want to learn Armenian.” Cultivating this intrinsic value, she added, requires the support of community leadership. Kupelian insisted parental and community encouragement to use Western Armenian is crucial for implanting this desire to learn the language.

A lively question and answer session with the audience followed. In response to a question about the role of the Republic in Armenia in fostering Eastern or Western Armenian, Matiossian said that “we in the diaspora sold ourselves in the name of Armenia, and therefore our lack of sufficient funds is also tied to that concept,” suggesting that the diaspora must foster the learning of Western Armenian and support a thriving life in diaspora as well as in the Republic of Armenia. In order for this to happen, Matiossian insisted, we need the support of our leadership and we must “put our money where our mouth is.”

“Absolutely crucial is that the Armenian language be used every single day,” he stressed strongly in conclusion.