The Zohrab Information Center is pleased to announce two exciting Enrichment Evenings, both presentations of new and important books, during the month of March. These two evenings continue the Spring Season theme of migration, which the Zohrab Information Center is exploring through the lens of Armenian and Armenian Christian history. Both events look at the most disastrous and momentous occasion of migration in Armenian history, the Armenian Genocide. They do so, however, from two very different lenses: one unearths significant Genocide diaries while the other makes a philosophical argument concerning continuity of genocidal policies. Together, they present some of the newest academic work on the Armenian Genocide and the most consequential migration in Armenian history.

You can also view our full schedule through Uul

First, on Tuesday, March 5th, at 7 PM in the Guild Hall of the Armenian Diocese, Dr. Vahé Tachjian will present his new book, Daily Life in the Abyss: Genocide Diaries, 1915-1918. 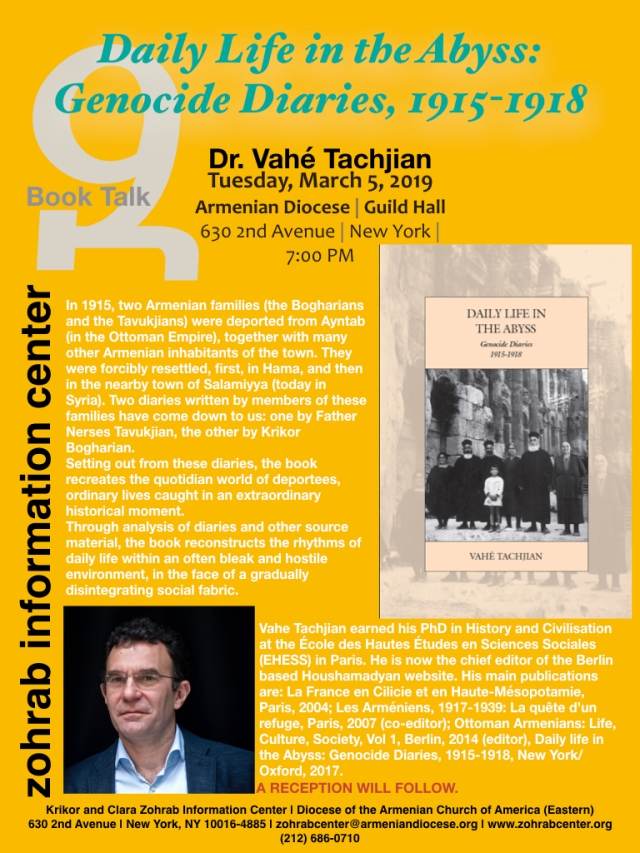 In 1915, two Armenian families (the Bogharians and the Tavukjians) were deported from Ayntab (in the Ottoman Empire), together with many other Armenian inhabitants of the town. They were forcibly resettled, first, in Hama, and then in the nearby town of Salamiyya (today in Syria). Two diaries written by members of these families have come down to us: one by Father Nerses Tavukjian, the other by Krikor Bogharian.
Setting out from these diaries, the book recreates the quotidian world of deportees, ordinary lives caught in an extraordinary historical moment.
Through analysis of diaries and other source material, the book reconstructs the rhythms of daily life within an often bleak and hostile environment, in the face of a gradually disintegrating social fabric.

Our second even in the month of March, to take place on Friday, March 22nd, at 7 PM in Vartan Hall (note change of location), is a book presentation of The Sins of the Fathers: Turkish Denialism and the Armenian Genocide by Dr. Siobhan Nash-Marshall.

argues for Turkish denialism as a continuation of that Genocide. The first part of a trilogy, the book explores the roots of the post-truth phenomenon through the example of the Armenian Genocide, “the most successful modern project of historical and social engineering.” Professor Siobhan Nash-Marshall holds the Mary T. Clark Chair of Christian Philosophy at Manhattanville College. She is the author of many books and articles on metaphysics and the problem of evil.

Both events will be followed by a reception. All are welcome! Please contact the Krikor and Clara Zohrab Information Center at (212)686-0710 for further information. We hope to see you there!