The Zohrab Center is home to an extensive collection of the academic journal “Pazmaveb,” with issues dating back to 1904. “Pazmaveb,” published by the Mekhitarist Order in Venice, Italy, is the longest-running Armenian periodical and one of the oldest publications in Europe. Founded in 1843, its first editors were Gabriel Aivazovsky (1843-1848), and Ghevond Alishan (1849-1851) both of whom belonged to the Mekhitarist Order. Published primarily in Armenian, “Pazmaveb” contains scholarly articles ranging from Armenian history to politics to literature. 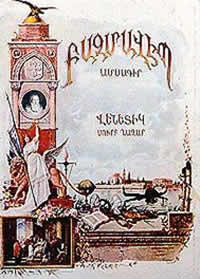 The Zohrab Center’s library collection contains over 20,000 books and resources ranging from Armenian literature, history and religion to Armenian newspapers, journals and periodicals. Each week, one of the center’s holdings will be highlighted to familiarize the general public about the contents of the Zohrab Center.