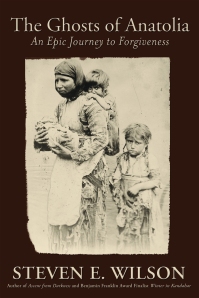 Award-winning author Dr. Steven E. Wilson recently published his latest adventure novel “The Ghosts of Anatolia: An Epic Journey to Forgiveness” a story about three families, two Turkish and one Armenian, at the start of World War I. After a trip to Jerusalem, Dr. Wilson, an ophthalmologist and scientist by profession, was inspired to write a historical novel about the Armenian Genocide. “The Ghosts of Anatolia” is his third publication. Taleen Babayan recently interviewed Dr. Wilson, who will present his newest book at the Zohrab Center on Thursday evening, November 11.

Taleen Babayan: What motivated you to write a novel with the Armenian Genocide serving as the backdrop?

Dr. Steven Wilson: Like many Americans, I knew very little about what happened in the Ottoman Empire, until my first trip to Jerusalem in 1996. While I was there to give medical lectures, my wife and I had a few days to tour the city. We were fascinated to find the city’s Armenian Quarter, especially because the living areas of the quarter were inaccessible to ordinary tourists like us. As we were leaving, we found a large banner hanging on a corner in the quarter. It was a photograph of a group of Armenian men hanging from scaffolds in Aleppo, Syria in 1915, and block letters that read, “Don’t forget the Armenian Genocide.” That image, and its message, stuck with me for years after that trip. Once I started writing historical novels, I wanted to write one with this story as the backdrop. As it turns out, “The Ghosts of Anatolia” was my third novel, but my best to date, at least in my opinion, after deriving more writing experience from the first two.

TB: You are quite detailed in your descriptions of Armenian-populated cities in Anatolia as well as the genocide. How did you conduct your historical research for the book?

SW: After my first experience in Jerusalem, I began reading everything I could get my hands on about what happened in the Ottoman Empire. I read dozens of related books over the next twelve years. Among those that influenced me, and my novel, were “Days of Tragedy in Armenia: Personal Experiences in Harpoot” by the American missionary Henry H. Riggs, the writings and photographs of Armin T. Wegner, “Black Dog of Fate,” by Peter Balakian, and “My Brother’s Road: An American’s Fateful Journey to Armenia,” by Markar Meikonian.

TB: Did you talk to any genocide survivors in order to gain more insight into the tragedies of the genocide?

SW: Yes, I did. In 2008, when I made my most recent trip to Jerusalem, George Hintlian, the archivist at the Armenian Patriarchate, took me on a personal tour of the Armenian Quarter. During that tour, I met several elderly genocide survivors and had a chance to talk with them for quite some time. One woman I met there was the inspiration for my character, “Mariam Simouian,” the compassionate gardener who cared for my protagonist Sirak Kazerian and his sister when they arrived in Jerusalem. And yes, the woman I met in Jerusalem really did love caring for the plants in her impressive garden.

TB: You are also the author of the acclaimed “Winter in Kandahar,” an adventure novel that takes place in Afghanistan post-9/11. How did you develop an interest in chronicling conflict in this part of the world?

SW: I am also an academic ophthalmologist and cell biologist. My medical and scientific career has provided me the opportunity to travel extensively throughout the world. During the past twenty years, I’ve made over fifty trips to the Middle East and Asia (including Turkey, Afghanistan, India, Pakistan, China, Japan, Korea, Singapore, Saudi Arabia, United Arab Emirates, Jordan, Israel, etc.) and I became fascinated with the history, geography and peoples of these intriguing regions of the world. I love to write adventure novels. What could be more fascinating than these enthralling countries and the people who live there? One thing all of my novels have in common is conflict between ethnic groups—the Tajiks and the Pashtun in Afghanistan in “Winter in Kandahar,” the Kurds and the Arabs in Iraq and Syria in “Ascent from Darkness,” and the Armenians and the Turks in Anatolia, Syria and America in “The Ghosts of Anatolia.”

TB: You are, by profession, an eye surgeon and scientist. How does your profession help inspire your writing? Do you find it challenging to find time to write your novels?

SW: My academic career in ophthalmology and cell biology helped me develop a love for writing. Medical and scientific writing is a very different style of prose compared to novel writing. However, it’s still writing, and I became very fond of composing the hundreds of papers and grants I’ve written, and ultimately turned to writing novels. However, you might be interested to know that my earliest creative writing was actually song lyrics that I composed during my college years!

It is nearly impossible to find time to write my novels when I am home in Cleveland because the demands of my family and my medical/scientific career. However, my extensive travel schedule affords me a lot of time to spend on my novels and medical/scientific writings. You’d be amazed how much writing you can get done on a twenty-hour flight to Singapore! Virtually one hundred percent of all three of my novels was written on airplane flights.

TB: What are any upcoming projects you have in the works?

SW: I am in the beginning stages of writing my fourth adventure novel “Dalliance in Dubai,” a novel that focuses on the dichotomy of culture between the conservative Arabs that rule Dubai and the people from around the world they’ve brought in to work in this fascinating city. I’ve received dozens of letters angrily asking me why I dropped the character Stone Waverly (Protagonist in “Ascent from Darkness” and major character in “Winter in Kandahar”) from “The Ghosts of Anatolia.” Waverly didn’t fit in “The Ghosts of Anatolia,” but he returns in “Dalliance in Dubai.”

Dr. Wilson’s book presentation will take place on Thursday, November 11 at 7 pm at the Zohrab Center, located in the Diocesan Complex, at 34th Street and 2nd Avenue, New York, NY.  A book signing and wine and cheese reception will follow the program. This event is free and open to the public. For more information, please contact Taleen Babayan at 212.686.0710.

For further information on Dr. Wilson and “The Ghosts of Anatolia,” please visit http://www.hailey-grey-books.com.

3 thoughts on “Interview with Dr. Steven E. Wilson, author of “The Ghosts of Anatolia””