Jennifer Manoukian will present a lecture entitled Zareh Vorpouni and the Metamorphosis of Western Armenian Literature at the Zohrab Center on Tuesday, June 13 at 7PM. The presentation comes on the heels of Manoukian’s new English translation of the French-Armenian author’s 1967 novel, The Candidate.

Zareh Vorpouni was the least known, but the most prolific in a coterie of young writers who turned Paris of the 1920’s and 1930’s into the epicenter of Western Armenian literature. These writers deliberately broke with their Ottoman Armenian predecessors in theme and form, staging an outright rebellion against them. Their invention of new literary standards and their impulse to represent the new realities of the diaspora challenged the conservatism of the Armenian community and created a fleeting period in which interrogations of nationalism, clericalism and sexuality became the norm in literature.

Vorpouni spent the second half of the twentieth century at the height of his creativity. “He embodies the new, the experimental, and the transgressive in Western Armenian fiction,” writes Manoukian.

Jennifer Manoukian is a translator of Western Armenian literature. She will begin her doctoral studies at U.C.L.A. in the Department of Near Eastern Languages and Cultures in the fall. She received her Master’s degree from the Department of Middle East, South Asian and African Studies at Columbia University and her Bachelor’s degree in French and Middle Eastern Studies at Rutger’s University. She recently presented her 2014 English translation of Zabel Yessayan’s The Gardens of Silihdar at the Zohrab Center.

Vorpouni’s novel, The Candidate, follows the trials and travails of two Armenian refugees in 1920s Paris. At its core, Manoukian reveals “a commentary on the (im)possibility of Turkish-Armenian reconciliation, the toll of sacrifice and the tremors of trauma and love, which mirror the wandering, introspective and hybridized life of its author,” she writes.
Manoukian will speak about The Candidate, which she co-translated with Ishkhan Jinbashian. CLICK HERE to download a flyer. 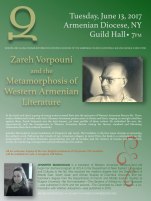 Manoukian’s presentation will take place in the Guild Hall of the Armenian Diocese in New York on Tuesday, June 13 at 7PM. The event is free and open to the public. Copies of The Candidate will be available for sale. A reception and conversation will follow.
For further information contact the Zohrab Center at zohrabcenter@armeniandiocese.org or (212) 686-0710.
Advertisement

The Zohrab Center recently received a dozen early issues of the Armenian periodical Zvartnots. The journal of literature and art was published intermittently in Paris from 1929 to 1964. The precious issues were donated by Mr. and Mrs. Hagop and Sylvia of Boyajian of Wilbraham, Massachusetts.

The Zohrab Center is the only library in the United States to hold these issues.

Alongside marvelous poems and short literary pieces, the inaugural issue features an Armenian translation of an essay by the Austrian philosopher and novelist Stefan Zweig; an article on pre-Christian Armenian architecture by the great historian of architecture Toros Toromanian; and  a tribute to Franz Schubert on the hundredth anniversary of his death by a very young Ara Bartevian, who would later become a well-known musician, composer and choral conductor.

Indeed, in the preface to the first issue of Zvartnots, the editor, Hrant Paluian, stresses that the new journal would be “the refuge for those young people who have been held captive to the aged caretakers of our literature.” True to the secularism of the moment, he  continues sardonically:

The residents of Zvartnots, with angelic innocence, have been purified of political passions, partisan enmities and ridiculous heresies. They have been purged of religious and moral prejudices. They believe only in Armenian literature and art.

The word Zvartnots derives from the Armenian zvartunk, literally, “vigilant ones,” the angels who serve God joyfully and tirelessly, and who serve as models of the Christian life. The name was given to the famous seventh-century round church in Etchmiadzin, the ruins of which can be seen today.

The Zohrab Center’s new issues of this marvelous testament to Armenian intellectual vitality between the World Wars in Europe have been added to the ZIC online catalogue. Anyone interested in perusing them is welcome to visit the Center or to contact the staff for questions and further assistance.