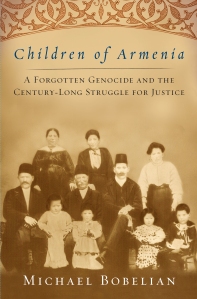 Michael Bobelian’s first book, Children of Armenia: A Forgotten Genocide and the Century-Long Struggle for Justice, focusing on the aftermath of the Armenian Genocide, was recently published by Simon & Schuster.

Mr. Bobelian, a graduate of the Columbia Graduate School of Journalism, is a lawyer, journalist, and grandson of Genocide survivors. His work has appeared in Forbes.com, American Lawyer, and Legal Affairs magazine and featured on NPR’s Leonard Lopate show. He resides in New York City with his wife and daughter.

Mr. Bobelian sat down with Taleen Babayan at the Krikor and Clara Zohrab Information Center in New York City last September to discuss his new book, which explores how the Armenian Genocide entered public consciousness and quickly faded from it. Mr. Bobelian looks at the evolution of U.S. policy regarding the Genocide and also at how Armenian-Americans initially went along with the shifting away of attention from the Genocide.

Taleen Babayan: I read in the prologue about your first encounters with Armenian Genocide survivors and the genocide memorial service at St. Vartan Cathedral in 1985. But what inspired you or interested you to write this book?

Michael Bobelian: There was no specific moment that inspired me to write my book. By the time I was in my late 20s, I began to really wonder why we have these events and these commemorations and why we still need to have them. There is a lot of energy and money spent on Armenian commemorations and on genocide-related activities, and I really began to question how that started, and what the purpose of it was, and when I asked these questions, I realized no one had those answers.

One thought on “Interview with Michael Bobelian, Author of “Children of Armenia””